Sagging or deflation of the eyebrows that lends a heavy look above the eyes.

How is a brow lift done?

Botulinum toxin or Botox injections performed around the eyes in select muscles that cause pulling down of the eyebrows allows the brows to lift under the influence of the main brow-lifting muscle (frontalis muscle). Results last for 3-6 months.

Injectable fillers placed under the eyebrow skin can lift the brow by inflating areas where volume has been lost. Results last 8 months to a year.

There are many variations of the surgical brow lift, and the choice of procedure depends on the anatomy of the patient, the position of the hairline, and the surgeon’s preference.

An incision is made several centimeters behind the hairline for the entire length of the forehead. The skin and muscle of the brow are lifted under the muscle layer (subgaleal) or just on top of the forehead bone (subperiosteal). The brow attachments are released and in some cases the brow depressor muscles are weakened or partially removed. Extra skin is removed along the incision and closure is performed with stitches and/or staples inside the hairline. The bicoronal brow lift raises the hairline and is not ideal for someone with an already high hairline. 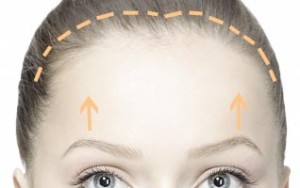 The incision is made inside the forehead hairline in a zig-zag shape. A reverse bevel in the direction of the hair follicles allow for hair to grow through the scar during healing. The skin only is lifted and the brow depressor muscles are weakened or partially removed in some cases. Extra skin is removed in front of the incision, and the area is closed with stitches. The hairline brow lift can lower a high hairline or, if the incision is made behind the hairline it can raise a low hairline. 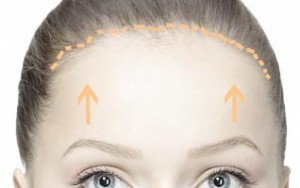 Small incisions are made vertically behind the hairline with horizontal incisions in the temples. The brow is lifted under the bone lining (periosteum) in order to raise the skin and forehead muscle. The brow depressor muscles are weakened or partially removed in some cases. An endoscope (mini tube-camera with light) or a lighted retractor is used for visualization during surgery. After the structures that hold the brow downward (periosteum, brow depressors, ligaments) are released, the brow is suspended in a higher position using anchors. The anchors may be stitches alone, stitches with bone tunnels, metal or dissolvable screws, or other types of implants. The incisions are closed with stitches or staples. 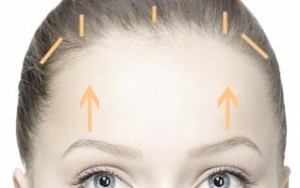 The temporal lift raises the outer portion of the brow (from the arch outward), which is the area that tends to show the earliest signs of sagging. The incisions are made behind the hairline in the temples. The skin is raised and the structures that tether the eyebrows are released (periosteum, ligaments, brow depressor muscles). The outer part of the eyebrow is lifted and anchored with stitches buried under the skin and the skin is closed behind the hairline with stitches or staples. 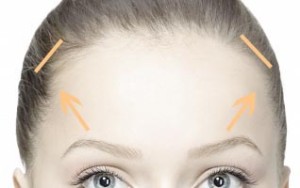 Skin is removed directly above the brow hairs, with the incision directly along the upper edge of the eyebrow hair. The direct brow lift is typically reserved for individuals with thicker eyebrows. 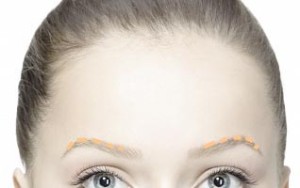 The incision is made in the upper eyelid crease, as used in upper eyelid lift surgery. The muscle and skin are lifted beneath the eyebrows and stitches or implants are used to anchor the low-positioned eyebrow skin to a higher place on the forehead bone. The internal brow lift tends to provide less lifting than other brow-lifting surgeries. Some consider the internal brow lift to be more of a brow stabilization procedure.

Brow lift surgery has several risks including the possibility of scalp numbness, loss of hair (temporary or permanent) around the incision site, asymmetry, bleeding, infection, and nerve injury that could lead to weakness of the brow lifting muscles. 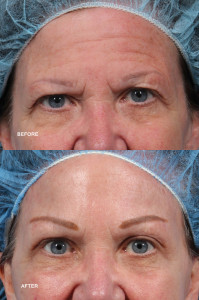